Dynamical model for the neural activity of singing Serinus canaria

This article was published as part of the special topic on Instabilities and Nonequilibrium Structures. 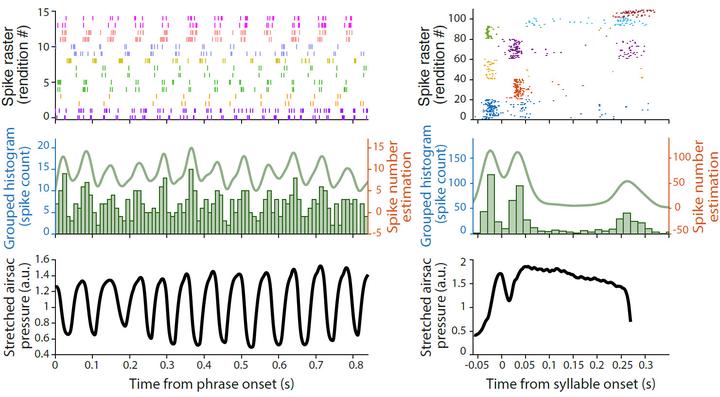 Vocal production in songbirds is a key topic regarding the motor control of a complex, learned behavior. Birdsong is the result of the interaction between the activity of an intricate set of neural nuclei specifically dedicated to song production and learning (known as the “song system”), the respiratory system and the vocal organ. These systems interact and give rise to precise biomechanical motor gestures which result in song production. Telencephalic neural nuclei play a key role in the production of motor commands that drive the periphery, and while several attempts have been made to understand their coding strategy, difficulties arise when trying to understand neural activity in the frame of the song system as a whole. In this work, we report neural additive models embedded in an architecture compatible with the song system to provide a tool to reduce the dimensionality of the problem by considering the global activity of the units in each neural nucleus. This model is capable of generating outputs compatible with measurements of air sac pressure during song production in canaries (Serinus canaria). In this work, we show that the activity in a telencephalic nucleus required by the model to reproduce the observed respiratory gestures is compatible with electrophysiological recordings of single neuron activity in freely behaving animals.